How is bedwetting defined?

Bedwetting, also known as nocturnal incontinence or enuresis, is an uncontrollable leakage of urine in discreet amounts while asleep.4 The word ‘uncontrollable’ is very important as it acknowledges that the child’s actions are involuntary. Many more boys than girls are late in becoming dry at night. Bedwetting is also sub-divided into two types, depending on whether the child’s wetting is just at night (the sole focus of this booklet) or whether daytime incontinence and other symptoms are also present.

Most children have what is known as ‘Primary bedwetting’ – this means that they have never had a period of time when they have been dry. Contrary to popular belief, primary bedwetting is not a psychological issue. ‘Secondary bedwetting’ occurs in children who have previously been dry for at least 6 months and have now started wetting again for some reason. The reasons are many and varied but often associated with big changes or upsets in the child’s life which can include starting a new school or childcare, the birth of a sibling, the death of a relative or moving home. In most cases, however, there is an underlying medical reason for bedwetting, which you should visit your doctor to discuss.

How common is bedwetting?1

It is important to know that you are not alone with this problem. Bedwetting is not often discussed freely among parents, but it is a common problem and your child will certainly not be the only one who is experiencing difficulties.

Across Europe, it is estimated that more than five million children wet the bed.2

What are possible causes for bedwetting ?

Bedwetting is known to be ‘multi-factorial’, that is there are several different reasons which either singly or collectively could be causing your child to wet the bed.

The body isn’t sending the right signals yet
The body naturally produces a substance called ‘vasopressin’ which acts on the kidneys, telling them to slow down and concentrate urine production during the night. If not enough vasopressin is being produced, this message isn’t getting through and so the bladder has to try and cope with high daytime levels of urine during the night when the child is asleep. As your child gets older, the level of vasopressin could increase, solving the problem.

The bladder has reduced functional capacity at night
There is a balance between the amount of urine produced during the night and the bladder’s ability to hold it. A study has shown that enuretic children only experienced wet nights when nocturnal urine production was high and exceeded bladder capacity.6

Your child has difficulty waking up
All people differ in the level of stimuli required to wake them from sleep. This is known as the ‘arousal threshold’. A study comparing wetters with non-wetters found a significant difference in arousal threshold between these groups. Furthermore a deficiency in the substance mentioned above (vasopressin) could also contribute to the failure to wake in response to a full bladder.6,7

It’s a family thing
Ask your parents if you were slightly older than others before being dry at night. If you or your partner wet the bed beyond 5 years of age it is common for your child to do the same. 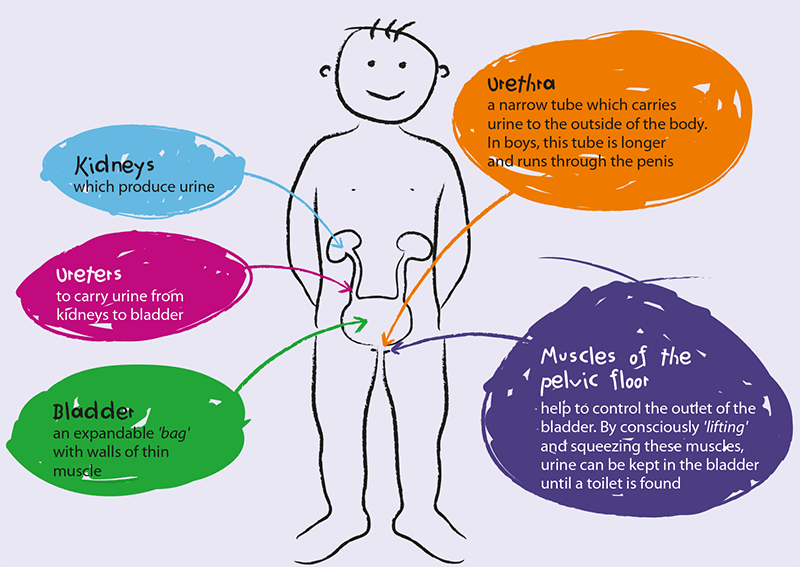 Throughout the day the bladder gradually fills up with urine from the kidneys. The bladder is like a stretchy bag that expands to hold the volume of liquid. When it reaches its maximum capacity it starts to contract and sends a message to the brain that it needs to be emptied. The bladder contracts as it empties, squeezing out the urine.

Children start to be aware of the sensation of needing to empty their bladder around the age of 2-3 years and gradually learn to control the urge until they can get to a toilet. The majority of children achieve good daytime control around 3-4 years of age – girls are normally a little ahead of boys. At this stage it is perfectly normal for 4 year olds to wet the bed during the night and to have occasional accidents for some years to come.

Although it is generally believed that children grow out of bedwetting this is by no means always the case – the more frequent the bedwetting, the more likely it is to continue into adulthood. Overall, the prevalence in adults is 2%.11

Do not be concerned about asking for advice – after all, the more you know, the better equipped you are going to be to handle the situation. You may feel like you have tried everything and may be getting frustrated that your child isn’t growing out of their bedwetting as you had hoped. Talking it over with a professional will give you reassurance and could provide a fresh approach to the situation. There are effective, fast acting and safe treatments available that your doctor may suggest after having discussed everything with you and your child.

To best help your child? Talk to your doctor.